Brazil’s Gol airline finds itself in a sticky financial situation Skift Take
Considering the weight of its debt, it’s hard to imagine how Gol flights can take off. And the kicker? People keep saying it can learn a thing or two from Ryanair.
— Jason Clampet
Share
Tweet
Share
Post
Send

Gol Linhas Aereas Inteligentes SA’s $1.6 billion debt load, the most of any major airline worldwide relative to profit, is fueling speculation it will sell assets to raise cash or merge with another carrier.

Net debt equaled 25 times Gol’s earnings before interest, taxes, depreciation and amortization, or Ebitda, in the 12 months ended June 30, the highest ratio among 31 carriers with a market value above $1 billion, data compiled by Bloomberg show. That compares with a ratio of 3.4 for Santiago-based Latam Airlines Group SA, 1.3 for United Continental Holdings Inc. and 0.2 for European discount carrier Ryanair Holdings Plc, the world’s least indebted airline. 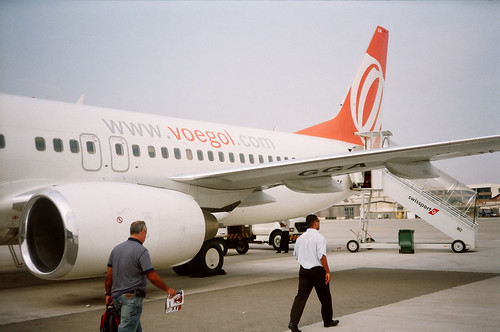 A Gol airplane on the tarmac. Photo by Marco Gomes.

Gol has named a new chief executive officer, cut jobs and eliminated flights this year after posting losses in four of the past five quarters and surrendering market share to Latam Airlines’ Tam SA. Gol plans to take its Smiles mileage-program unit public in the second half of 2013, a person familiar with the transaction told Bloomberg News on Aug. 15.

“I wouldn’t like to be in their shoes,” Eric Conrads, who helps manage $1 billion in stocks at ING Groep NV in New York, said in a telephone interview. “They could raise ticket prices, but they are not market leaders and it means they would sacrifice more market share. They are not in a position to sacrifice market share right now.”

A decision on a Smiles IPO will be made by the end of the year, Gol Chief Financial Officer Edmar Prado Lopes Neto said in a telephone interview on Aug. 28. Lopes Neto became CFO and investor relations director after Leonardo Pereira resigned from the posts on Aug. 15 to become the head of Brazil’s securities regulator.

The Sao Paulo-based company is seeking to turn Smiles into a separate business unit by the end of this year before starting the IPO process, said the person familiar with the plan, who asked not to be identified because the talks are private.

Gol announced in December that Delta Air Lines Inc., the world’s second-biggest airline by traffic, agreed to buy a $100 million stake and that the carriers would begin booking passengers on each other’s jets.

The Brazilian airline reported a loss of 715 million reais ($352 million) in the second quarter, the biggest among major airlines after Air France-KLM. Gol posted an Ebitda loss of 222.6 million reais, more than twice the median forecast for a loss of 82 million from five analysts in a Bloomberg survey.

“Gol has reported some pretty weak earnings in the past quarters, with a weaker currency pushing the company’s debt higher and higher,” Fausto Gouveia, who helps manage 380 million reais at Legan Administracao de Recursos, said in a phone interview from Sao Paulo. “They need to make some big move to turn things around. Selling the Smiles unit would be a positive step.”

The airline’s net debt reached 3.27 billion reais in June, of which 70 percent is linked to the U.S. dollar. The real has dropped 8.1 percent this year, the worst performing currency among 25 emerging markets tracked by Bloomberg.

“The bulk of our debt is due in four years from now,” Gol CFO Lopes Neto said. “By then margins will have recovered.”

Recent cost-cutting measures may be enough to ease pressure to sell assets or merge, said Henrique Florentino, an analyst at UM Investimentos.

“Operational margins should improve in coming quarters,” he said in an interview from Sao Paulo. He has a hold recommendation on the stock.

Gol sees no room to cut fares even as Tam wins more passengers, Paulo Kakinoff, who took over as CEO in July, said in a telephone interview on Aug. 16.

“The cost pressure is so high now, we can’t think of a reduction of yield,” he said. Yield is the average fare for each seat flown a kilometer, an industry benchmark that reflects both revenue and air-travel demand.

Gol’s market share in Brazil fell to about 33 percent in July from 38 percent a year earlier, while Tam’s rose to 42 percent from 41 percent, according to the civil aviation regulator.

The loss in market share may boost pressure to merge as the domestic industry consolidates, said Laurence Balter, who oversees $100 million for Oracle Investment Research, based in Fox Island, Washington. Cost-cutting measures may not be enough, he said.

“With a negative cash flow, they have two choices: look to merge with another carrier or receive a massive equity injection,” Balter said in an e-mailed response to questions. “Aircraft depreciate and require buckets of money to maintain, and unless an airline leases or pays cash for its equipment, debt will always choke them to death.”