Skift Take
Sweden is using its growing wealth to focus on infrastructure projects that will spur growth. And in places where the rail Vs. cars debate isn’t total nonsense, that means investing in high-speed rail.
— Jason Clampet
Share
Tweet
Share
Post
Send

Sweden plans to hike infrastructure spending radically over the coming decade in a move to boost long-term economic growth and create new jobs.

The government said it would invest an additional 85.5 billion kronor ($13 billion) in infrastructure projects for the years 2014 to 2025. 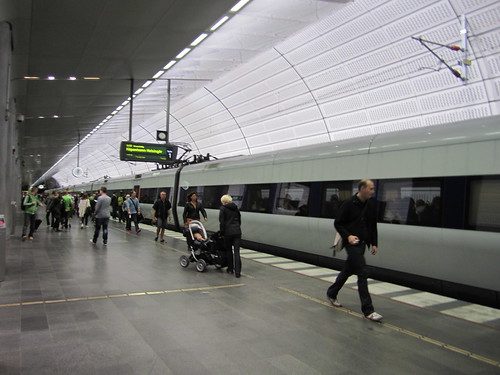 A train in Malmo, Sweden. Photo by La Citta Vita.

Investments include a high-speed train line between Stockholm and the city of Linkoping, and other train lines across the country.

“The Sweden of today has a greater need to bind different parts of the country together, enable people to commute to work and create the conditions for industry to be competitive.”

Politicians in affected municipalities were applauding the initiative and even the green-red political opposition gave it the thumbs up.

The Finance Ministry said in a separate statement that the country’s public finances are among the strongest in Europe, which provides scope for boosting investment to create more jobs in growing enterprises.

“To equip Sweden for even tougher international competition, the government will focus on infrastructure and research, as well as measures to improve the Swedish investment climate,” said Minister for Finance Anders Borg.

The government has also said it wants to cut the level of corporate tax.