Will the American Airlines ruling force the parties to sit down and talk it out? Skift Take
Sabre and Travelport clearly have used their market power to stymie American Airlines. It would be interesting to find out from the courts how they ultimately view the antitrust allegations — but the parties could settle long before that happens.
— Dennis Schaal
Share
Tweet
Share
Post
Send

A federal judge’s ruling allowing an American Airlines antitrust suit against Sabre, Travelport, and Orbitz Worldwide to proceed could provide some impetus for the parties to finally sit down and conduct some serious negotiations.

Without ruling on the veracity of the claims, the judge decided that if the airline’s allegations were true, then they could be sufficient to support claims of conspiracy and monopoly. 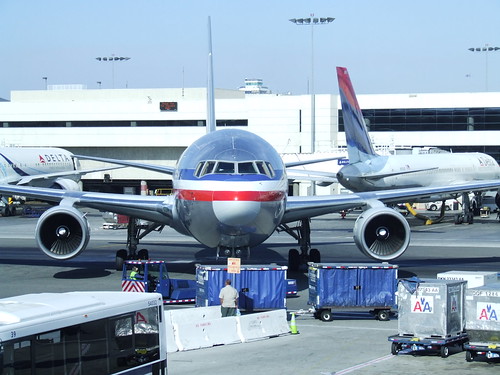 An American Airlines 767 on the tarmac. Photo by Simon Clancy.

“… American has alleged sufficient facts sufficient to support a reasonable inference that Sabre, Travelport, Orbitz and other industry participants engaged in a combination or conspiracy to preserve the GDS model and exclude AA Direct Connect from the market and submarkets,” opined judge Terry Means in U.S. District Court, Fort Worth, Texas.

American Airlines calculates that Sabre processes 60% of all airline tickets sold through U.S. travel agencies, and that Travelport handles 30%.

By urging travel agencies and corporations to get their flight data directly from American Airlines instead of through the GDSs, the airline is seeking to reduce its costs and to usurp the power of the GDSs.

With so much at stake for American Airlines and the global distribution systems — which would face serious disintermediation if other airlines follow American’s lead with direct-connect — there is an argument to be made that the latest rulling is just one in a series, and the parties will let this case and a handful of others play out in the courts.

Attorney Al Anolik of TravelLaw.com, however, thinks the ruling could spur negotiations.

“It’s enough of a scare that if I was the attorney for the defendants, I’d say, it is show time,” Anorak says, adding that the losing side in this antitrust skirmish would be responsible for paying the winner’s mega attorneys’ fees.

Anolik says he would take his clients aside and ask them if they indeed phoned other defendants and conspired to stop American Airlines’ direct-connect push, or whether they got together for drinks and discussed as much at an industry conference.

American alleges that the three defendants and other travel agencies banded together to rule out using American Airlines’ direct-connect technology, and to bias their displays so that American’s flight choices would be akin to disappearing ink.

And, consider some of the other still-unproven allegations in the suit:

American, working its way through the bankruptcy court proceedings, clearly is anxious to settle things through negotiations.

Pestronk adds: “Like a teenager, AA blames everyone but itself.”

American doesn’t see it that way, of course. A spokesperson says:

“The court’s order confirms that American has adequately pleaded numerous antitrust claims against the defendants, including monopolization and conspiracy claims. We would prefer to resolve our dispute with the defendants amicably, but any such resolutions need to end anticompetitive practices and to account for the harm done to American. We are convinced these claims have substantial merit, and absent settlements, we intend to continue vigorously pursuing our legal rights.”

And, publicly, at least, the defendants are standing firm.

Asked whether the judge’s ruling lent some credence to American’s allegations and serves as an impetus to negotiate, Travelport, for one, was having none of it.

“The ruling assumed all allegations to be true for purposes of a motion to dismiss whih is far from giving credence to the allegations,” says Eric Bock, Travelport’s chief legal officer. “We stand willing to provide AA with a long-term commercial agreement, which is fair to both parties, but this will not be influenced by the meritless antitrust allegations by AA.”

When American Airlines filed its antitrust suit in early 2011, there was lots of grumbling in the travel industry that the airline was grasping at straws, and that the claims had no merit.

Then, when the airline filed for bankruptcy in November 2011, it was assumed by many that direct-connect would be a casualty.

With the latest federal court ruling, it appears that American’s antitrust claims and direct-connective initiative still have some life.