Catskills puts away the Borscht Belt and goes with generic tagline Sure, "Borscht Belt" doesn't make visitors think of romance or nature, but generic taglines that mean nothing don't help to distinguish a destination at all.

The mountainous region once known as the Borscht Belt now has a new slogan to market its year-round attractions: “The Catskills, Always in Season.” 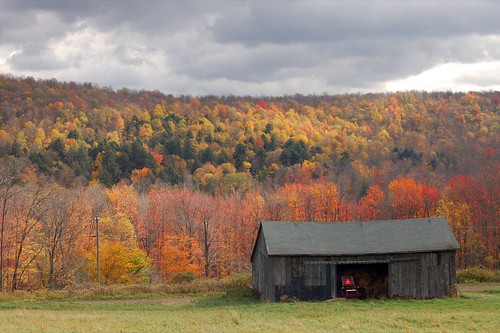 A barn in the Catskills region. Photo by Max Talbot-Minkin.

The winner of the “Capture the Catskills” slogan contest was announced Saturday at the Belleayre Music Festival. It was created by Jenn Nolan of the Delaware County hamlet of Arkville and won the most public votes of five finalists.

The Catskill Park Resource Foundation launched the slogan contest in June. The idea was to create a catchy tagline that “reflects the natural, recreational, historic and community treasures of the region.”

The Foundation said 733 votes were cast.

The Catskills were once nicknamed the Borscht Belt because of its numerous resorts popular with New York City Jewish clientele.