For the past four presidential cycles, political conventions in the U.S. have turned into high-security temporary fortresses that do their best to block out all public dissent while promoting an picture of public support and unity.

Sometime Wednesday night, work crews lined Brorein Street with iron fencing from Meridian Avenue to the Brorein Street bridge. The fence is about eight feet tall, with grating small enough to prevent a foothold for climbing.

The barrier appears to be the northern boundary of the convention’s security perimeter, but true to its name, the Secret Service wouldn’t confirm what it is. Anyone wishing to enter the security zone near the Forum and Convention Center during next week’s RNC will need a Secret Service-issued pass. 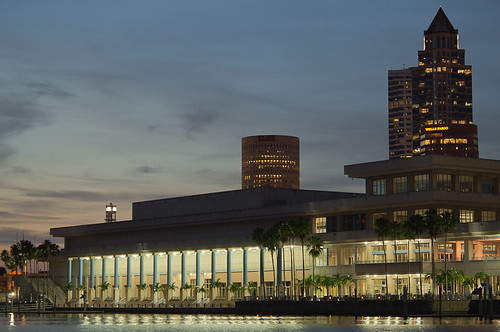 More iron fencing was stacked up along Beneficial Drive, suggesting that will be the eastern border.

Ty Trayner, a criminal defense lawyer, practices law across from Channelside Bay Plaza and just across Meridian Avenue from the new 8-foot fence.

His rooftop balcony will have a spectacular view of next week’s festivities, including a media staging area, a protest zone and the convention’s main venue, the Forum. At least one broadcaster considered renting out the balcony, he said.

Trayner wasn’t especially concerned about any mayhem next week and plans to go into the office as usual.

“Fifty thousand (people) for a downtown doesn’t sound like all that much,” he said.

Other signs of the convention also popped up Wednesday and Thursday. Packs of police officers in tan shirts and riding bicycles roved around downtown Thursday, the first day of the Tampa Police Department’s convention bike patrols.

It can be tricky to navigate around the fences to visit the few small businesses in the area, such as Hattricks Tavern on Franklin Street. Lucky for him, co-owner David Mangione is renting out the bar for all four days of the convention to Anheuser-Busch for private parties, he said.

His thoughts on the bicycle patrols, iron and wire fences and throngs of media satellite trucks?

“It’s going to be a circus,” Mangione said of the convention.

Workers planning to still drive through downtown will need to mind the road closures, temporary one-way streets and restrictions on street parking next week. The city has a map of affected roads at the following Web address: http://www.tampagov.net/dept_public_affairs/information_resources/rnc/road_closures.asp.