Despite pockets of danger, Mexico is still safer than most cities in the U.S. The conditions near border states are deplorable, but travelers who know Mexico also know that most parts of the country are safer than major U.S. cities when it comes to violent crime.

A new leader, president-elect Enrique Pena Nieto, will take control of Mexicoin December, and it’s unclear just how he’ll approach the drug war that has killed an esimated 50,000 people since late 2006.

But what if you’re an American traveler thinking about a trip now? How safe is it? 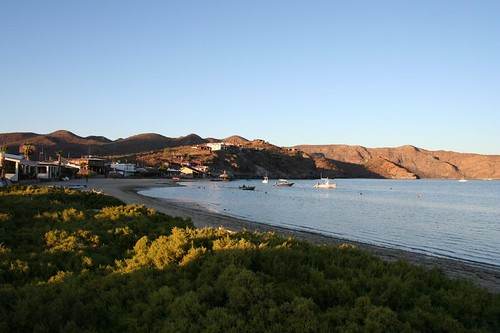 A settlement along Bahia Concepcion in Baja California Sur. Photo by Jason Clampet.

Of course the answer depends on who you are, where you’re headed and when. But for what it’s worth, I’ve recently returned from a great week in the eastern state of Yucatan (story coming soon). Before I went, I looked closely at a recent report from the Trans-Border Institute at the University of San Diego’s Joan B. Kroc School of Peace Studies.

One finding of “Drug Violence in Mexico,” by the Institute’s Cory Molzahn, Viridiana Rios and David A. Shirk, is that the killings not only increased in 2011, but spread over a broader area.

Still, the report found that more than half of Mexico’s organized-crime killings last year took place in just five states: Chihuahua; Tamaulipas; Nuevo Leon; Sinaloa; and Guerrero (which includes Acapulco, Taxco and Itxtapa/Zihuatanejo). In all, Mexico has 31 states.

Meanwhile, the report found that the states of Yucatan, Campeche, Tlaxcala and Baja California Sur (which includes Los Cabos) “have been largely free of violence, with fewer than 15 cases of organized crime homicides during the year.”

The U.S. State Department’s most recent travel warning for Mexico, issued Feb. 8, noted the same trend. It also reported that “the number of U.S. citizens reported to the Department of State as murdered in Mexico increased from 35 in 2007 to 120 in 2011.”

That figure includes 34 homicide victims in Baja California (the northern portion of the Baja peninsula that includes Tijuana), which reported 250 drug-war homicides in the first nine months of 2011.