Now that you know, where's the spa-rty at?

Parties at the spa, treatments for stressed and time-pressed consumers, cross-cultural traditions, and a whole lot of purple — from lavender-scented treatments to mauve nail polish — are some of the trends and services that were shown off at the annual International Spa Association meeting held Aug. 16 in New York. Here are some details: 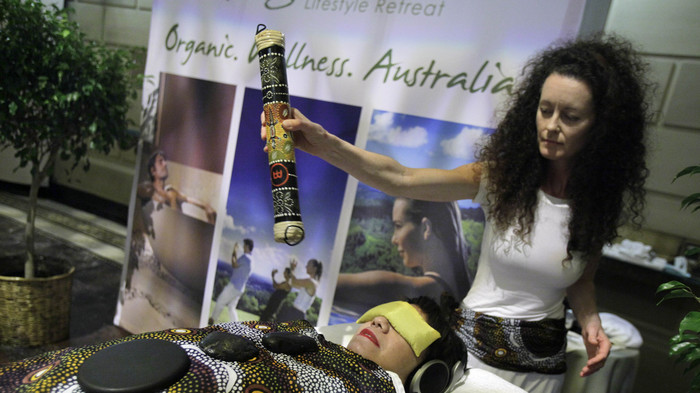 Photo by The Associated Press.

Rejuvenation at the spa need not be a solitary pursuit. “A trend we’ve been seeing is private events called ‘spa-rtys’ getting booked in the spa space — for weddings, corporate events, etc.” said Lauren Clifford, a spokeswoman for the Regent Palms Turks and Caicos, which has a 26,000-square-foot indoor-outdoor facility at the Caribbean island resort.

Aspira Spa, located at The Osthoff Resort in Elkhart Lake, Wis., is also seeing gatherings of friends, colleagues, sorority sisters and even multi-generational families for group events at the spa, says general manager Lola Roeh. Roeh’s recently married daughter Shannan “didn’t do a traditional shower, but had a spa shower instead. Guests had a spa service, then gathered back for lunch, then had another service and got together in the whirlpool to relax.”

Massage aficionados may be familiar with Thai massage techniques in which practitioners walk on their clients’ backs. Miraval, a spa located in Tucson, Ariz., turned heads at the spa meeting with a demonstration of a form of Thai massage called Naga ($215, 50 minutes) in which therapist Peter Bird was suspended above his client, holding on to white silk ropes wrapped around his arms. He varied the pressure of his feet and legs on the client’s muscles by using the ropes for balance and to move up and down.

“A lot of people think they’re going to be sore afterwards but they’re not, because the pressure is deep but soft, not sharp,” said Bird, who studied the technique in Thailand and says holding the ropes makes it easy for him to balance his weight.

Kohler Waters Spa, based in Kohler, Wis., is introducing a ritual inspired by Middle Eastern hammams in which guests are robed in traditional Turkish towels called pestemals, bathed in warm water poured from a copper bowl, then scrubbed with an exfoliating mitt. “Kohler is known for water and bathing products, so this is a service that’s ritualistic and water-based, offering quiet and relaxation,” said Linda Machtig, Kohler’s group marketing manager.

At Gwinganna, a retreat in Queensland, Australia, about an hour from Brisbane, Aboriginal influences are incorporated into a stress-reduction treatment that includes listening to didgeridoo music while the therapist shakes a rainstick and applies smooth, hot black basalt stones to the body. “We’re looking to switch off the stress responses,” said Gwinganna marketing manager Tracy Willis.

In a hurry? A new facial treatment called HydraFacial available in 2,000 spas nationwide offers five procedures in 15 minutes: exfoliation of dead skin, a gentle acid peel, pore-cleaning, hydration with antioxidants and application of moisturizers and sunscreen. The treatment runs $135-$175 depending on location.

“There’s no downtime, and you get instant results,” said Alex Ignon, director of HydraFacial marketing. Brides-to-be can have the treatment a day before the wedding without worrying about a side effect of reddened skin.

Deborah Lippmann is a manicurist to the stars but says her quick-dry and waterproof nail polishes and treatments work for real women with busy schedules, whether they’re walking the red carpet or doing dishes. Lippmann is known for doing nails for celebs, designers, magazine covers and runways, and her high-end products ($18 to $20 for polishes) have long been available at retailers like Barneys and Neiman Marcus, but now she’s bringing her lacquers and treatments to spas at hotels like the Fontainebleau Miami and Trump, Ritz-Carlton and Four Seasons properties.

For the insomniac, Mohonk Mountain House’s “Solutions for Modern Living” services now include a treatment called “Attainable Sleep” that helps guests at the New Paltz, N.Y., spa re-learn how to fall asleep through relaxation, aromatherapy, a soak and massage ($185, 90 minutes). Mohonk also sells aromatic oils and bath salts to help clients recreate the feeling at home.

Purple is popular in spa services, as a color and as a concept.

Aspira is offering an “Indigo Journey” that includes a violet clay mask, massage with violet-infused oil, reflexology, lavender aromatherapy and “chromatherapy” (color therapy with purple tones), and an elderberry facial. Clients handle sparkling amethyst stones as part of the three-hour, $435 treatment, which also incorporates Hindu beliefs in opening the center of intuition, or “third eye.”

Kohler Waters Spa is promoting a “lavender parfait” pedicure and manicure, while Massage Envy, a membership-based day spa in 800 locations, is offering a lavender foot scrub as a $10 add-on service to a massage, with hot towels to open pores and shea butter to moisturize. (Massage Envy clinics will also donate $10 from every massage and facial on Sept. 19 to the Arthritis Foundation.)

Lippmann says mauve is the nail color for fall. And she adds that dressing up purple polish with a little glitter, as she does with her “Let’s Go Crazy” line of lacquer, is not just for little girls; it’s a way for women of all ages to add sparkle to a look. She also says dark colors look just fine with the new trend of shorter nails.

The International Spa Association’s annual look at the industry by the numbers found a slight uptick in 2011, with $13.4 billion in revenue and 156 million spa visits, a more than 4 percent increase from 2010, according to an analysis by PricewaterhouseCoopers of information provided by 1,000 destination and day spas in the U.S. The number of full-time employees in the industry is up as well by 9 percent, though part-time and contract employees declined slightly, as did the number of spa locations.

“Everybody in the industry is slightly encouraged by seeing the return of some growth. The consumer is beginning to spend more money and looking ahead we’ve picked up a lot of confidence in the industry,” said Colin McIlheney, PwC global research director.