There may indeed be a slowdown of China's economy, but it's still building international airports at a breakneck pace and households are seeing large increases in salaries every year.

Soaring numbers of Chinese tourists packed onto flights out of the country is a sure sign that a fast-growing consumer class of around 130 million is not worried that the likely slowest year of economic growth since 1999 will sap their spending power.

Nearly 39 million mainlanders left China on overseas trips in the first half of 2012, roughly double on five years ago and evidence that a powerful consumer force – envisaged by the top leadership as the engine of economic expansion in a generation to come – may be bulking up faster than thought.

The question for investors is if a burgeoning bourgeoisie is now big enough to fully offset the economic impact of faltering foreign demand evident in data last week, when undershoots in July new bank lending, export, import and industrial output growth prompted analysts to start slicing into GDP forecasts.

“If consumers feel good about things they’ll spend. If they don’t feel good they’ll stop,” he told Reuters. “Travel is a good indicator because people are travelling more and they are consuming a lot when they travel abroad.” 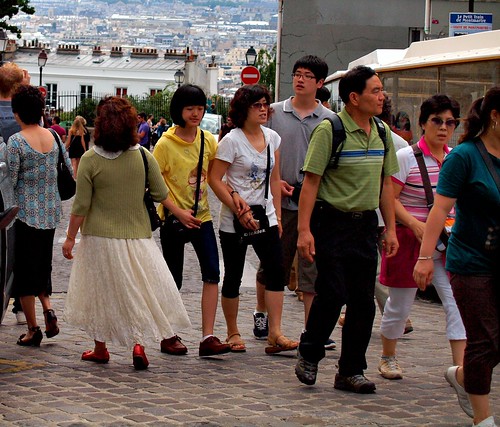 Investors, facing world growth slowing to levels economists define as marking a global recession, are anxious for any sign that critical consumer mass may have already arrived in China.

Consumer spending in China has comfortably enjoyed double-digit growth for a decade, while exports have slowed to become a net drag on the economy in 2011 and in the first half of 2012.

Retail sales rose 13.1 percent year on year in July. Adjust for inflation and it was the second best month of the year.

But that’s not been enough to arrest six straight quarters of slowdown, with the latest Reuters poll forecasting economic growth to slide to 8 percent in 2012 from 9.2 percent in 2011.

While well below the 10 percent average of the last 30 years and a level that has previously prompted urgent action to create jobs, 8 percent remains above Beijing’s 7.5 percent target.

Meanwhile the labor market appears tight, with data showing the ratio of vacancies to workers near its highest in 10 years.

Evidence that consumers are rapidly getting stronger comes from the Geneva-based Digital Luxury Group, which reckons China’s travel market is already worth some $232 billion.

Its new World Luxury Index China Hotels report says Chinese travelers made 70 million overseas trips in 2011 to be pampered at spa resorts in Bali, to shop in Dubai, Paris and London, and to spend in Singapore and Hong Kong.

Part of the proof is in the building going on. China, IATA says, plans to build 56 new airports nationwide before the end of 2016, with a further 16 relocated and 91 being expanded.

Chinese carriers made about half of all the $7.9 billion in profits earned by the global airline industry in 2011, according to IATA, which expects international traffic growth of 8-9 percent from China in the five years to 2015.

A Beijing-backed World Bank report envisages per capita income rising to $16,000 by 2030 from about $5,000 now, with two thirds of economic activity forecast to come from domestic consumption against less than 50 percent now.

A shift to the domestic market, leveraging China’s 1.3 billion-strong population, would cushion the economy from huge falls in foreign demand that Europe’s debt crisis is causing, barely three years on from the trade shock it suffered in the 2008-09 global financial turmoil.

An emerging urban middle class has made grocery shopping the engine of domestic retail sales growth, taking in 41 percent of all retail spending in China which analysts at Citi reckon will be up 55 percent up over five years to $600 billion in 2012.

Annual double digit wage rises over the last decade – the government has decreed minimum wages rise at least 13 percent in the five years to 2015 – have helped China create what brokerage CLSA says is “the world’s best consumption story”.

But while workers in the world’s second largest economy are earning more, they lag well behind those of the United States.

China’s wealthy elite, however, have generated a whole new market for the world’s luxury personal goods makers, estimated to be worth $25 billion a year now and likely to leapfrog Japan and the United States to the $28 billion top spot by 2015.

It indicates a consumer market presently polarized between the super rich and a middle-class with modest discretionary spending strength, but growing rapidly in size and affluence.

It is one reason why Yolanda Fernandez Lommen, head of the economics unit at the Asian Development Bank’s China mission, says a self-sustaining consumer class is some way off.

“We consider that 10-15 percent of the population shows a consumption pattern that is consistent with the type that would be regarded as a solid domestic driver of growth,” she said.

“In general, economies where consumption plays a meaningful role as a driver of growth entail a wide middle class that on average comprises about 70-80 percent of the population.”

China officially classed 51 percent of its citizens as urban dwellers in 2011, but that includes some 230 million rural migrant workers who generally do poorly paid jobs in cities, lack residency rights in them and have very little to spend.

Analysts at consultancy, McKinsey, say affluence is arriving faster than many economists anticipate, forecasting a giant leap by 2020 based on annual surveys it has carried out since 2005.

By then China will have 167 million “mainstream” consumer households – those with annual disposable income of between $16,000 and $34,000 – more than 10 times the 14 million, or 6 percent, who currently fit that definition.

Analysts at Nomura point out that domestic consumption contributed 4.5 percentage points of the 7.8 percent growth in China in the first half of 2012.

All of which implies consumer strength underpinning activity – and the confidence Mintel’s French says his clients have in the spending power of China’s shoppers at home and overseas.

“The only thing we’re seeing slowdown in is some softening in the higher end numbers for luxury goods. But the reason for that is because we have got unparalleled amounts of arbitrage going on from the Chinese going abroad and shopping,” he said.