After London rose to the occasion for a third time with an outstanding summer Games, the Olympics now moves towards uncharted territory.

The 2012 Games proved as successful as the 1908 and 1948 editions following grim warnings about possible transport, security and weather disruptions.

Now the spotlight will shine on Rio de Janeiro and the first Games to be staged in South America. If Rio delivers, the Games could then conceivably go to Africa, the final continent for the Olympic movement.

“Rio is an experiment,” said Gerhard Heiberg, the chairman of the International Olympic Committee marketing commission.

“It is new. They have never had such a big event in the whole of South America. They have to do a lot on the infrastructure side.

“Hopefully it will go well, we think it will go well. If that is successful, I think the opening for going to Africa will be even bigger because you prove that in a developing nation it is possible. Why not 2024?” 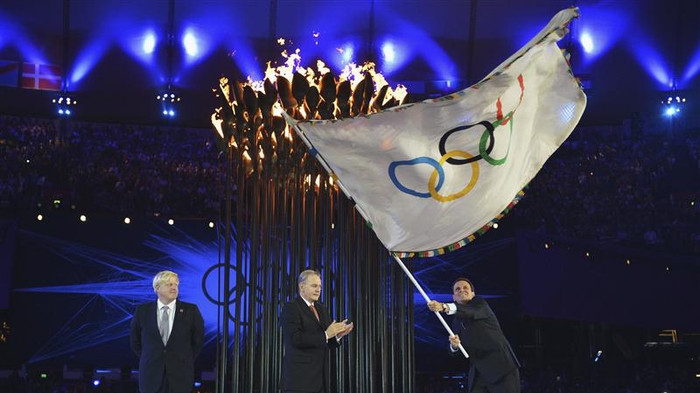 io de Janeiro Mayor Eduardo Paes holds the Olympic flag after receiving it from IOC President Jacques Rogge (C), as London Mayor Boris Johnson (L) watches during the ceremonial handing over of the Olympic flag at the closing ceremony of the London 2012 Olympic Games at the Olympic stadium August 12, 2012. Photo by REUTERS/Jeff J Mitchell/Pool.

Kenya’s Prime Minister Raila Odinga announced earlier this week that the capital Nairobi plans to bid for the 2024 Olympics, with the IOC due to elect the host city in 2017.

Tokyo, Madrid and Istanbul are bidding for the 2020 Games, with a decision next year.

Rio will feature two new sports in rugby sevens and golf, choices which have revived arguments about what games should be in the Olympics.

Critics argue that the two new sports, like tennis and basketball, have their own elite circuits and should not be in the Games which for athletics and swimming and a host of other sports remain the ultimate stage.

The pragmatists say the relationship is one of mutual convenience with the IOC getting sponsorship money and the sports getting wider exposure.

One sport in danger when the IOC meets in Buenos Aires next year to decide their core sports is the modern pentathlon, the only sport specifically designed for the modern Games.

“Modern” is a misnomer. A competition highlighting the adventures facing a 19th century soldier was invented by Baron Pierre de Coubertin, the founder of the first modern Games in 1896 and its retention would be for sentimental reasons only.

On the broader front, London, the world’s most cosmopolitan city celebrated international diversity and further advanced the cause of women’s sport.

Brunei, Qatar and Saudi Arabia sent their first female athletes to the Games and women’s boxing proved an emphatic success.

“The combat was beautiful,” said Moroccan Nawal El Moutawakel, the first Islamic woman to win an Olympic medal who was elected as an IOC vice-president before the Games began.

“It was a wonderful show. They were technical and highly skilled. This was very important, a huge step. It reminds me of my 1984 hurdles gold medal.

“To see every National Olympic Committee represented by women for me is sensational. It is an historic moment, the first time to see Saudis competing and to see girls from Qatar and Brunei. We have battled for it for so many years. This is very important.”

Keeping the world’s biggest sporting festival not only relevant but solvent is the IOC’s chief concern in a period of global economic uncertainty.

On Sunday, Rogge said the 2016 organizers needed to finalize their budget as soon as possible, a reflection of the problems facing a dynamic economy now affected by financial contagion from the euro zone.