There's such bi-partisan anger in the U.S. congress over the EU rules that even though the NGO's push for a calmer approach makes total sense it's doubtful that it's politically feasible.

Sixteen environmental groups on Friday urged President Barack Obama not to give into pressure by the U.S. airline industry to file an action under the U.N.’s aviation body to block an EU law requiring all foreign airlines to participate in its carbon trading system.

In their letter to the White House, the groups warned that filing a so-called Article-84 action in the International Civil Aviation Organization (ICAO) to challenge the EU climate change directive would undermine the body’s effort to create a global framework to curb greenhouse gas emissions from the aviation sector.

The EU law would require all airlines to pay for the carbon they emit on flights landing at or departing from European airports. 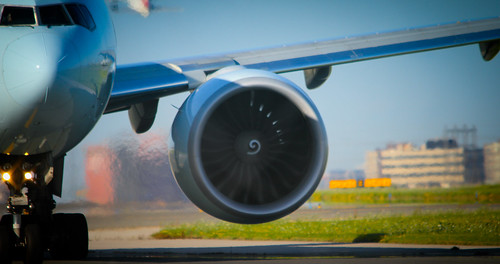 A commercial airline on the runway. Photo by Farhan Amoor.

“Filing a formal proceeding to block the directive would be highly inconsistent with your Administration’s efforts to reduce carbon pollution from other sources,” the groups wrote.

They added that filing the international action “would undermine your administration’s stated goal of achieving an agreed framework in ICAO to limit global warming pollution from international aviation.”

Earlier this week, a coalition of industry lobby groups urged Secretary of State Hillary Clinton and Transportation Secretary Ray LaHood to go beyond their diplomatic efforts to shepherd a global alternative to the EU’s carbon trading system.

They asked the administration to file the Article 84 action to “strongly restate opposition” to the EU’s application of its cap-and-trade system to U.S. airlines and warned that too much time has gone by without a resolution to the feud.

But a senior administration official said this week after the conclusion of two days of talks between the U.S. and 16 other countries opposed to the EU law that countries were committed to finding an ICAO solution.

The European Commission has repeatedly said the only grounds for waiving its scheme, which has stirred threats of an international trade war, would be if ICAO could come up with an equally effective world-wide solution to rising airline emissions.

But the environmental groups said that instead of enhancing ICAO’s ability to reach a solution by next year, an aggressive Article 84 action would undermine its progress.

Meanwhile, lawmakers on Capitol Hill have also put pressure on the Obama administration to take a stronger stance against Europe and its aviation law.

Congressman John Mica, a Democrat who authored a strong bill shielding U.S. airlines from complying with the European law that passed in the House last year, urged his Senate counterparts on Friday to fast-track passage of their version of the legislation before Congress breaks for a month-long summer recess.

The Senate commerce committee approved the bill on Tuesday. Staff of one of the bill’s co-sponsors said it plans to ready the bill for a vote on the Senate floor in September.

“The Senate should expedite approval of this bill as soon as possible, and the House and Senate can move forward to complete a final bill to send to the president,” Mica said in a statement.