Nothing like German politicians and Hollywood starts coming to the rescue of your country's tourism sector. Perhaps they'll visit London next?

With a little bit of help from Hollywood stars and – yes – German politicians, Greece is back on the tourist map, experiencing an unexpected boost to its economic mainstay that has surprised even officials.

In recent days Robert de Niro and John Travolta have been spotted admiring 5th century BC delights at Athens’ Acropolis museum, Tom Hanks has been snapped splashing in the sea off the Cycladic isle of Antiparos, while Ethan Hawke has been captured at Costa Navarino, a prime resort on the Peloponnese. If Athens’ tourism ministry wanted A-list endorsement, it got it when superstars Brad Pitt and Angela Jolie rented a beachfront villa at the resort where they are spending the summer with their six children. 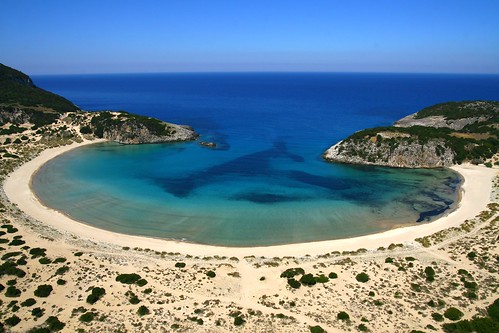 Ordinary tourists who might have cancelled holidays when the debt-stricken country seemed close to economic meltdown, two months ago, now appear to have had a change of heart. Over the past few weeks bookings have rebounded to the point that industry insiders expect arrivals to be on a par with those of other peak years, hitting 16 million by the end of 2012.

“Numbers have rebounded. Despite the fact that there was so much negative publicity, people have booked and it now looks very realistic that we will get to 16 million [visitors], if not more,” said Andreas Andreadis, who presides over the Association of Greek Tourism Enterprises (Sete). Admitting he had been taken aback, Andreadis said he also foresaw the sector raking in around €32bn (£25.3bn) in direct and indirect receipts – the equivalent of about 16.5% of the Greek economy. Tourism accounts for one in five jobs, more than any other industry.

In Athens, which had been worst hit by the crisis, hotels are suddenly brimming as Europe’s traditional holiday month gets under way. The Athens Hilton reported almost full occupancy in June and July as tourists snapped up special offers including a cultural weekend with an array of free visits to the capital’s museums. “Optimism is definitely returning. We really hope this positive trend continues,” said communications manager Tina Toribaba. “Athens deserves to be discovered. It has so much to offer.”

At the height of Greece’s economic drama, following inconclusive elections in May, as many as 50,000 reservations – half of those usually made on a daily basis at that time of year – were being cancelled. Leading the nosedive were Germans, fearing the backlash of being perceived as the source of Berlin’s insistence that Athens apply a tough austerity regime in return for EU-IMF rescue loans to prop up its near-bankrupt economy. By the end of the month, Teutonic taste for Greece had plummeted by more than 30 % – unprecedented for a country where Germans, even more so than Britons, have long led the league table of arrivals. Industry leaders lamented that German tourists were staying away because they feared being attacked – or even “having waiters spit in their food” – following violent street protests that peaked with the burning of the German flag outside the Greek parliament in February.

“But,” says Andreadis, “had there been even one case, you can be sure we would have heard of it. The idea that Germans are not welcome had been proven wrong because news travels fast. From 30%, we now expect it [the drop] to be around 105t by the end of the year.”

Ironically, it is German politicians who have led the comeback. Although chancellor Angela Merkel is not among them, the local media has been merrily listing German MPs who have elected this summer to holiday on sun-blessed Greek isles in the Ionian, Aegean and Mediterranean seas, including Richard Pitterle, of the Die Linke party, Green party MP Beate Muller-Gemmeke, and Erik Schwenkert, who represents the FDP party.

As the engine of the Greek economy, it is hoped that tourism will provide almost half of the new jobs officials hope to create by 2021.

“Visitors from Russia, eastern Europe, Turkey, Israel and the Middle East have also made up [for other cancellations] and increased phenomenally,” said Andreadis. “The very high resilience of the sector this year shows the potential of Greek tourism and how much more can be done to pull the Greek economy out of recession and into growth again.”