Will London's transit disintegrate, or did we all overestimate its ability to mess up a good thing going, a British specialty? We'll find out.

Transport authorities have warned passengers “not to chance it” by expecting services to run as normal in the capital on Monday, as the system faces its first major test of combining weekday commuter traffic with a full day of Olympic events. 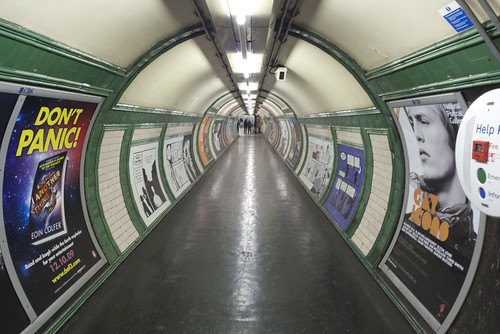 Interior hallway on the London Tube. Photo by Jim Bahn.

Despite the smooth operation so far – including successfully transporting spectators from the Olympic Stadium on special late trains after Friday’s opening ceremony – London’s transport bosses said they would not be complacent. Pressure on the road and rail networks has been eased by a significant drop in normal usage and they believe there is a risk that people may now, having witnessed the comparatively uncongested city, fail to heed the ongoing advice to avoid hotspots.

TfL estimated that traffic levels were 15% below usual patterns on Friday. In London, the biggest disruption came from the two cycling road races that closed streets south-west from the Mall out to Surrey on Saturday and Sunday, pushing traffic out onto other routes.

Tubes and trains mostly ran well over the weekend, with operators putting on additional train services equating to over 1 million extra seats on Sunday. However, passengers travelling from London on Virgin trains to watch the football in Manchester complained of vastly overcrowded carriages. Brazilian fans surprised the train operator by heeding official advice to arrive in plenty of time, turning up in numbers for departures soon after 8am with their match not kicking off until 3pm.

On Monday, the capital’s biggest headache is likely to be London Bridge, where commuter rail traffic and many of the 50,000 spectators planning to visit the equestrain events at Greenwich collide. Transport for London has advised avoiding the station if at all possible. Canary Wharf, an interchange of Jubilee line and Docklands light railway used by tens of thousands of workers and a stop or two away from key Olympic venues, is predicted to be exceptionally busy. TfL expects the DLR to have its busiest day of the entire Games period.

Robin Gisby, Network Rail’s managing director of network operations, said: “Even with changes to the station and extra staff and signage, London Bridge will be exceptionally busy. Commuters and Games travellers are advised to avoid the station if at all possible.” In an attempt to limit numbers, some evening services south-east from the capital will only be accessible from other London mainline stations.

Mike Brown, London Underground’s managing director, said: “After a fantastic opening ceremony and weekend of sport, many people will be going back to work on Monday in an Olympic city. It’s vital people plan ahead to avoid the travel hotspots and therefore delay and disruption to their journeys. Don’t chance it – plan ahead at getaheadofthegames.com.”

Mark Evers, TfL’s director of Games transport, said that the test posed by the opening ceremony had been a “bit artificial” and warned that the toughest challenges were ahead: “It’s far too early to pat ourselves on the back.” He said that the system would not be at its full Olympic stretch until Friday when athletics at the main Stratford venue, with 80,000 spectators in the Olympic stadium, combines with weekday traffic.