Northern Virginia's population boom over the last three decades brought with it traffic congestion and, fortunately, a regional plan to move workers in and out of Washington, D.C. The only current downside is that there aren't enough trains to meet the demand.

The Virginia Railway Express has turned 20.

On July 20, 1992, the first VRE trains picked up passengers in the Fredericksburg area. The trains started running out of Manassas a month earlier.

The first day Fredericksburg-area VRE trains ran, they carried a total of 920 passengers, according to Free Lance-Star reports at the time. VRE averaged 3,000 daily trips that first month. 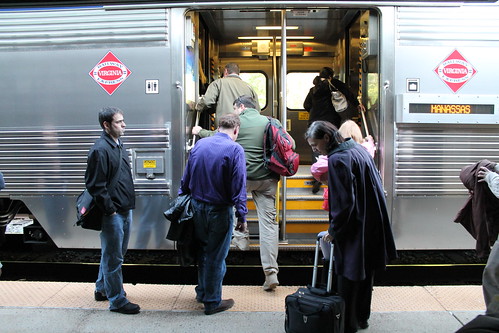 A lot has changed since then.

The commuter rail system has had its ups and downs over the years, but it has grown exponentially, especially in recent years.

The average number of daily VRE rider trips to and from Northern Virginia and D.C. now hovers at around 20,000, with more than 4 million rider trips tallied so far this fiscal year.

Of VRE’s top-10 daily rider trip records, all but one were set in 2011. That one other mark was set this year.

While the daily records aren’t being broken this year, the commuter rail system is running ahead of the 2011 pace.

The success of VRE also comes with pitfalls, such as how to handle the growth and how to pay for it.

“The biggest challenge is the capacity and increased ridership,” said Paul Milde, a member of the Stafford County Board of Supervisors and a member of the VRE Operations Board.

One key to fixing that, he said, is finding more space to store mid-day trains.

“We have options,” he said, adding that VRE will find a way to keep up with the growing ridership.

With that growth, though, the trains and parking lots have become crowded and fares have been raised to help with rising operational costs.

One way VRE has dealt with crowded trains is by offering “step-up” tickets, so some can ride Amtrak trains for a small additional fee. VRE also is considering adding to its 32-train fleet.

That might happen after the new Spotsylvania station opens in the Crossroads Industrial Park off the U.S. 17 bypass. Officials hope to have the station open in late 2013.

While there are parking issues, as with downtown Fredericksburg, VRE and its member jurisdictions are expanding the lots.

Work to add spaces is going on now at the Leeland and Brooke stations in Stafford. The new Spotsylvania station also will add more parking for VRE riders.

If recent years are any indication, ridership likely will keep growing, which is something VRE officials expect to happen.

“Our success is due in part to the quality and convenience of the ride,” said Milde, who sometimes uses the trains to commute. “VRE is a class act.”