Government steps in as commerce and tranquility collide on Honolulu beaches

Quality of life and running a business should go hand-in-hand, but without regulations the demands of locals and the whims of tourists often collide so that nobody has fun.

The administration of Mayor Peter Carlisle confirmed Friday that companies cannot conduct commercial activities — from kayak rentals to tour buses — on any city beach or park at any time without a specific license under a bill that took effect July 1.

Bill 5, which the City Council introduced in 2011 and approved this year, was designed to ban business activity at Kailua Beach Park on weekends. But city attorneys have concluded that the wording of the bill also means “commercial activities without permits are not allowed” at all Oahu parks under city jurisdiction at all times, city spokeswoman Louise Kim McCoy said Friday.

The city’s interpretation appears sweeping and could affect a large number of enterprises that conduct business on city parks, such as dive tour operators and food trucks.

City officials said after a week of warning companies, about two dozen citations have since been issued against businesses at Kailua Beach, among them kayak rental companies. 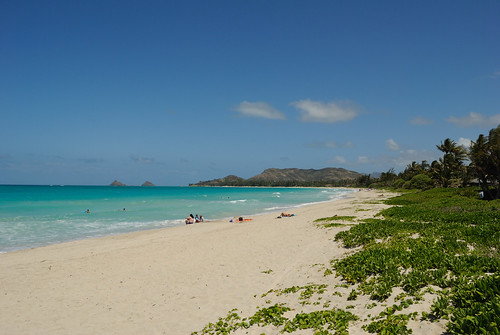 Bob Twogood, owner of Twogood Kayaks, said his Kailua company was cited five times through Friday, and as recently as Friday afternoon.

But police could be directed to issue citations with fines to businesses elsewhere. City Parks Director Gary Cabato warned Council members about the bill’s effects during recent Council meetings. But Council members pushing for a ban on commercial activity at Kailua Beach said they did not believe Cabato’s interpretation was valid.

Bill 5 does allow for those operators with permits, including two windsurfing vendors, to operate on weekdays only.

The interpretation of Bill 5 by city attorneys appears to nullify the impact of Bill 11, which was approved 7-2 by the Council on July 11. That bill bans all commercial activity on Kailua Beach.

Twogood and other commercial vendors have urged Mayor Peter Carlisle to veto the bill. Carlisle, in recent mayoral debates, has indicated he is open to a compromise. Before Bill 11’s passage, Cabato said he had been working on rules that would allow, through a permit process, a small number of commercial vendors at Kailua Beach. But a majority of Council members, led by Windward Councilman Ikaika Anderson, said parks officials were taking too long and that the patience of Kailua beachgoers was growing thin.

Anderson said he and his staff were told Friday of the conclusion made by city attorneys.

“The Council passed Bill 5 to protect two Windward Oahu parks from over-commercialization,” Anderson said. “The corporation counsel has determined that this bill applies islandwide, and corporation counsel certainly has the ability to have that interpretation of the law.”

He continued, “I’ll leave it up to the Council to determine whether Bill 5 is to be amended. Personally, I don’t believe it’s a bad thing to require permits for all commercial activity at city parks.”

A large number of Kailua residents have supported a full ban, saying the influx of kayaks and other business activity on the beach have turned a once tranquil neighborhood beach into a crowded tourist mecca.

Twogood and other operators of Kailua businesses held a news conference Friday to publicly urge Carlisle to veto Bill 11.

Regarding Bill 5 and the citations his company has received, Twogood said he believes he is allowed to operate because the city has no permitting process regulating kayaks.

“Nobody has a permit for anything on Oahu, not just us,” Twogood said. He said if he is the only one being cited, it is “selective enforcement” that he will contest. Twogood said he expects the issues posed by Bill 5 “to be resolved very quickly.”

On Thursday afternoon Twogood was arrested after he sprayed water on opponents who held protest signs in front of his kayak rental shop.

Twogood reiterated Friday that he was simply trying to cool down the protesters on a hot summer day. “They have a constitutional right to make fools of themselves,” he said.

Opponents holding signs in front of his shop on Friday were not amused. Kailua resident Jan Mosher said Twogood verbally assaulted her and questioned the wisdom of taking her children to the protest.

“It was very malicious and vindictive what he did,” she said.

Margy Grosswendt, a Realtor who has lived in Kailua for 37 years, said city officials should enforce laws that prohibit vendors without permits from operating. “I go to great lengths to follow the law,” Grosswendt said.

“The lawyers for the City Council have said that it is illegal for commercial businesses to operate, and it’s been going on for years.”