Even though the pull of enacting your deeply held beliefs is strong, so is the desire not to see tens of thousands of people unemployed and your most promising industry thrown into crisis.

The beanbag chair decorated with pharaonic-era rulers that Waleed displays has found another use since passing business at this Egyptian Red Sea resort slowed to a trickle.

As five hours go by in the sticky afternoon heat without a customer, he stretches out on the bag himself and dozes off. 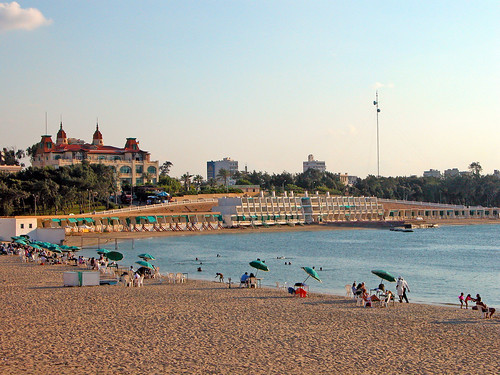 Resorts along the beach at Montazah Bay, Egypt. Photo by Dennis Jarvis.

Many in the industry fear it will never fully recover if the new Islamist president, Mohamed Mursi, bans the skimpy swimwear and alcoholic drinks that are standard items on beach holidays for many foreign tourists.

“My business has shrunk by at least 70 percent in the past year,” said Waleed, who asked to be identified by his first name only.

“Egypt lives on tourism. I think Mursi wants to Islamize tourism in the long run, but for the next few years he won’t do anything because people need to eat.”

Comments from Mursi, sworn in on June 30 after an interim period of army rule, and from Brotherhood officials suggest Waleed may be right.

The Brotherhood’s 81-page “Nahda” (Renaissance) program does not mention beach tourism – which brings in the most tourist dollars by far – and officials in the movement have said they have other priorities for now.

But one hint of disapproval can be found in Nahda’s promise to encourage alternatives – cultural, ecological and medical tourism, and desert excursions.

Pushed to clarify his position on bikinis and alcohol, Mursi refused to give a clear answer in a recent interview with al-Mehwar TV channel. He said tourism specialists must be consulted on all draft laws and described the issue as “very marginal, very superficial and affecting a very limited number of places”.

Vigorous denials from Mursi and his Muslim Brotherhood allies have failed to allay broader fears among more liberally-minded Egyptians of a concerted attack on civic and personal freedoms in the name of religion.

Pillar of the economy

Industry professionals say beach holidays make up as much as 80 percent of Egyptian tourism, a sector that became vital during the Mubarak era, when a chain of resorts were built from Sinai further south down the Red Sea coast.

Once the choice of ancient history enthusiasts and those who could afford luxurious cruises down the Nile, Egypt is now a serious rival to countries like Spain and Turkey as a sunny getaway for millions of cost-conscious Europeans.

Some 12 to 15 percent of Egypt’s workforce attends to the needs of foreign visitors, directly or indirectly. Tourism accounts for 11 percent of gross domestic product and a quarter of foreign exchange earnings, economist Samir Makary said.

It has offered work for a fast-growing population that stagnating manufacturing sectors were unable to absorb. Many labor-intensive industries are tied to tourism such as construction, food distribution and carpet-weaving.

Last year’s uprising, coupled with a global recession that also dampened travel demand, illustrates the dangers of relying on such a volatile industry.

That helped push foreign reserves at Egypt’s central bank from $36 billion before the uprising in January 2011 to about $15.53 billion last month, representing less than three months of imports, a level seen by economists as hazardous.

Tourism professionals appear confident that Mursi will avoid adding to their problems.

“They will allow tourism to operate normally until there are economic alternatives – and there never will be,” said Karim Mohsen of the Egyptian Travel Agents Association.

“Ban bikinis and alcohol and live with the guilt of at least 4.5 million people out of work in Egypt… People will take to the streets.”

After slumping in 2011, the number of visitors to Egypt in the first five months of this year was still down 26 percent from 2010, at 4.4 million. Tourism revenues were down 24 percent from 2010 at $3.6 billion, according to official figures.

In April, at the height of the spring tourist season, the world’s biggest tour operator TUI Travel said demand for holidays in Egypt was improving, with resorts recovering faster than Cairo, the hotbed of the uprising, which remained weak.

Tourism Minister Mounir Fakhry Abdel Nour told reporters on Tuesday he expects the country will have received more than 12 million tourists by the end of 2012, a 23 percent rise over the previous year.

For a country that foreigners were deserting during the height of the revolt against Mubarak, the comeback suggests an enduring appeal that could ensure growth – politics permitting.

“I am confident that tourism will be business as usual in the coming years,” said Ahmed Seddik, a Cairo-based travel consultant and tour guide. “Tourism is one of the pillars of the Egyptian economy. Mursi will simply not take chances with it.”

Makary, the economist, said he expected tourism to recover in the short term, but its future health would depend on the government.

The biggest danger to tourism was not in the threat of an Islamist crackdown but political instability that shows little sign of abating, travel executives said.

Each move towards a political settlement between the Brotherhood and the military has ended in failure.

Most recently Mursi has challenged the generals by reversing their decision to dissolve the Islamist-led parliament.

“Short- to medium-term tourism investments are negatively affected by the general political instability, but long-term investments have halted completely,” said Mohsen of the travel agents association.

Civil disturbances by Egyptians frustrated by the pace of political change and made worse by ineffectual security have hit Egypt’s image as a safe place to visit.

Waleed said eruptions of violence and strikes had blocked roads to the coastal cities and scared off tourists. A stadium riot that killed 74 soccer fans in the city of Port Said on February 1 sparked further violence in Cairo.

U.S.-based Crystal Cruises dropped Egypt from its itinerary this year, and said sales of its cruise plummeted following the stadium riots. The Pyramids of Giza were a staple of its cruises for years.

“There are a lot of marketing dollars spent promoting the original program,” said Mimi Weisband, Crystal Cruises Public Relations Vice President. “Travel agents and our guests, from the U.S. and internationally, were telling us they were concerned and nervous about the safety of travel in Cairo.”

Instability means any recovery in Egyptian tourism will be fragile at best. Tourism officials and industry executives say it is hardly the moment for political and social experiments.

“Saudi Arabia has the best virgin beaches, with soft sands. They have plenty of airports and good roads,” Mohsen said. “But not a single tourist goes except for the Muslim pilgrimage.”