As if the Olympics strike wasn’t bad enough, now there’s no Nadal

Culture minister Hunt has the quote of the day with his claim that the event has been "pretty smooth." Of course he also called the lines at Heathrow "pretty short," the weather in London "pretty swell," and the Murdoch newspaper matter "pretty scandal-free."

Strikes by train drivers and passport officials threaten major disruptions to the London Olympics, prompting the government to warn unions on Thursday that they risked public anger if the industrial action went ahead.

In a blow on the sporting front, the Games lost one of their biggest draws when reigning tennis champion Rafa Nadal pulled out after failing to recover from injury in what he called “one of the saddest moments of my career.” 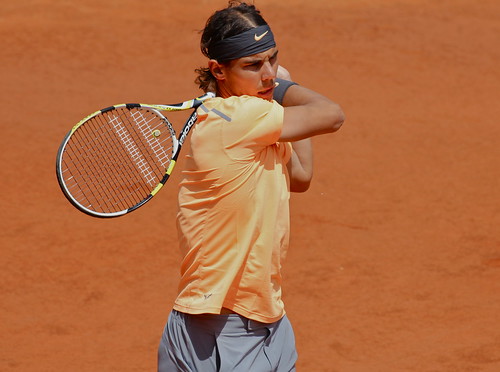 Rafael Nadal on the court in Rome in 2012. Photo by Marianne Bevis.

The Aslef rail union announced on Thursday that 450 of its members in central England would walk out between August 6 and 8 in a dispute over pensions, affecting passengers travelling from cities such as Sheffield, Nottingham and Derby to the capital.

The decision coincided with a move by border officials to strike on July 26, the day before the start of the Games, potentially delaying thousands of visitors arriving for the showpiece event.

“They are holding a strike on what is one of the key days for people coming into this country for the Olympic Games,” Home Secretary Theresa May said.

“They risk damaging people’s enjoyment of coming through into the UK,” she told Sky News. “We will of course put contingency arrangements in place to ensure we can deal with people coming into the country as smoothly as possible.”

The threat of transport chaos added to pressure on the government, which has already had to call in thousands of extra soldiers to guard the Games after a failed private sector recruitment drive left an embarrassing hole in security.

The wet weather, too, has dampened spirits ahead of the sporting showcase, which has earned the nickname the “Soggy Olympics” in the British media.

Perhaps it was no coincidence that Police lyrics “sending out an SOS”, from the song “Message in a Bottle”, blared out before the daily news conference at the Olympic Park in east London.

Culture Secretary Jeremy Hunt rejected accusations that the buildup to the Games had been a shambles, arguing that for such a major operation preparations had been remarkably smooth.

“I think it is very important that people understand that of course you are going to have a few hitches on a project of this scale, but actually things have gone pretty smoothly, and the athletes are getting a fantastic welcome in the village, and I think morale is very high.”

On the issue of the strikes, he said “It would be completely out of tune with the mood of the British public. This is a moment when Britain wants to show its best face to the world, and that is what the vast majority of the public wants as well.

“I would strongly counsel any unions thinking of disrupting this very important period, I think they would lose huge amounts of public support if they really tried to do this.”

The security glitch came after G4S said it could not provide a promised 10,400 security guards to staff Games venues, forcing the Defence Ministry to call up an extra 3,500 troops to take the armed forces contribution to 17,000.

A further 2,000 troops may be required if G4S fails to find a minimum requirement of 7,000 staff, and on Thursday the government said 1,200 soldiers had been put on standby as a precaution.

Hunt reiterated government assurances that the Games would be safe in a city where suicide bombers killed 52 people in attacks on the transport system in July 2005.

“Obviously we are monitoring the whole time what’s happening with respect to the changing security situation, and we have extremely competent intelligence services who are giving us advice and we are responding to that on an ongoing basis,” Hunt said when asked about the Burgas attack.

“The world can be absolutely certain that we will deliver a safe and secure Olympics. It has always been our number one priority.”

With the Games eight days away, British media has focused heavily on the opening ceremony amid reports of tension between Oscar-winning film director Danny Boyle, who is overseeing the 27 million pound ($42 million) show, and the Olympic Broadcasting Services in charge of airing the Games.

According to the Guardian newspaper, quoting an unnamed source, the atmosphere between the two was “miserable” and rehearsals were behind schedule.

The July 27 evening ceremony, to be watched by a global audience estimated at more than a billion people, has already been shortened to avoid a possible late-night rush for trains and buses home.

“I think I would expect there to be lots of negotiations going on behind the scenes, but I think the overall picture is very encouraging,” Hunt said, explaining that he was not aware of the specific problems being reported.

“I think it is going to be a sensational opening ceremony. It will show the best of Britain – its history, its culture, our contribution to the world.”

The ceremony will feature more than 10,000 performers and include the recreation of an idyllic English rural scene complete with live animals.

But missing from the athletes’ parade at the show will be Spain’s Nadal, who won gold in Beijing four years ago and had been expected to carry his nation’s flag.