Skift Take
The Maldives’ somewhat illegitimate president has proposed a voluntary tax that he says will go to environmental initiatives. But even the most eco of travelers has plenty of reasons to think the money won’t go anywhere near these purposes.
— Jason Clampet
Share
Tweet
Share
Post
Send 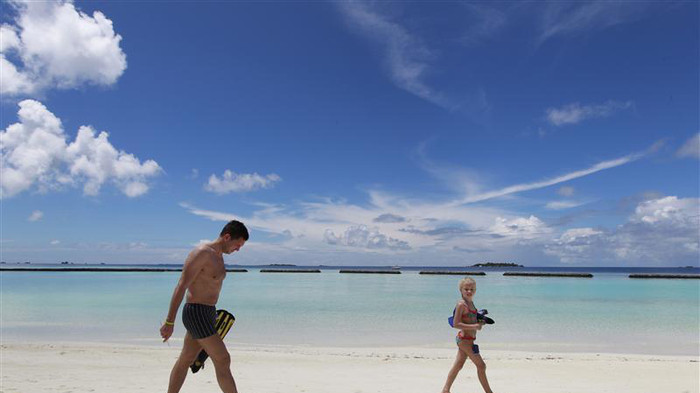 A tourist walks with a girl on the beach at Kurumba Resort on Vihamanafushi island February 11, 2012. REUTERS/Dinuka Liyanawatte

A voluntary tax on tourists who visit the luxury resorts and white sands of the Maldives could raise up to $100 million a year towards the country’s aim to become carbon neutral by 2020, President Mohamed Waheed said.

The Maldives is made up of 1,192 low-lying islands in the Indian Ocean. With average ground level of 1.5 meters above sea level, it is also the world’s lowest country and one of the most vulnerable as climate change raises sea levels.

The Maldives is perhaps most famous for its 100 island resorts, which attract around a million visitors each year, mainly from Europe and the United States.

In 2009, former President Mohamed Nasheed outlined a plan for the Maldives to become the world’s first carbon neutral country, having net zero carbon dioxide emissions, by 2020.

Under Nasheed, who said he was forced to resign on February 7 at gunpoint after a coup, there were proposals to enforce a $3 tax on tourists to help fund the plan.

Waheed, who was Nasheed’s vice president and took over the presidency, said the country now preferred a voluntary tax.

“We have proposed the idea of a voluntary fund for air travelers coming to the Maldives. Even if each tourist contributed $10, that’s $10 million (a year) for us and a substantial contribution to the carbon neutral program,” he told Reuters this week.

An airport construction project agreed last year will require $27 from each visitor and Waheed does not want to further burden the tourism industry, which officially accounts for 30 percent of the Maldives’ $2.1-billion economy, but is thought to be closer to 75-80 percent.

“I believe most of the tourists who come to the Maldives are environmentally conscious and quite happy to make a contribution to making the Maldives carbon neutral,” Waheed added.

The Maldives is reliant on imported fuel, like diesel, to generate electricity, which is estimated to have cost its economy around $240 million last year.

It has now embarked on a $1.1-billion plan to generate 60 percent of its electricity from renewable energy by 2020. Around 50 percent would come from solar photovoltaic power and the remaining 10 percent from wind energy and biofuels, Waheed said.

The country is rapidly trying to introduce solar in the capital Male and three islands which make up the greater Male area, covering about a third of the population.

It has plans to install about 2-3 megawatts (MW) of solar in the Male area but it would probably need 40 MW to meet electricity demand.

“We are a little bit behind schedule (on the renewables plan) but we hope we will be able to catch up over the next 5 years or so,” Waheed said.

“Male is not the most ideal island location right now – it doesn’t have ‘green’ buildings but a lot of companies are interested in developing them.”

Out of 100 resorts on the islands, 7 are considered to be “ecofriendly”, which means they try to minimize their carbon footprint, and one resort should get “carbon neutral” status by next year, he said.

The Maldives is also hoping to receive about $30 million from the Climate Investment Funds, channeled by various development banks to help poorer countries pilot low carbon projects. This should leverage around $120 million of capital which would also help scale up the Maldives’ renewables program, Waheed said.