Charleston, S.C.’s battle over cruise ships is getting downright rude

Charleston has a clear idea of what a good tourist is, and the thousands that descend from Carnival, NCL, and other mainstream lines just don't fit that bill. 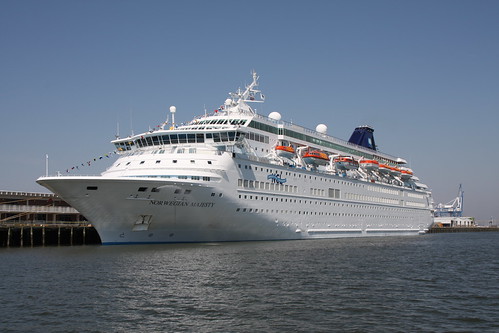 The Norwegian Majesty in Charleston harbor. Photo by Mr. T in DC.

Someone needs to tell those folks downtown that their new Spoleto flags don’t look anything like Philip Glass.

Of course, if you study one of these snazzy banners long enough, you realize it isn’t an indecipherable new image from the Spoleto Festival — it’s just another attack on the cruise ships.

And Mayor Joe Riley is not amused.

“I think it’s rude and unlike Charleston,” Riley says. “This is bad manners, not befitting our city. It’s a mistake.”

Then there’s that fourth reason, the one downtowners have wisely stopped repeating: They don’t want all those low-class tourists in their highfalutin neighborhoods.

Despite the lawsuits, the pollution angle is the cruise ship foes’ best argument.

Now, no one complains about emissions from all those cargo ships, which are 96 percent of the port’s business.

Katie Zimmerman at the Coastal Conservation League says that’s because the cruise ships put out 10 times the pollution that cargo ships do. They are, after all, powering the equivalent of an entire city. Good point.

But the city and the State Ports Authority say cruise ship emissions will decrease dramatically next month, when the North American Emissions Control Area goes into effect. That will force ships to reduce particulate matter by 85 percent and sulfur content by 98 percent.

Zimmerman says the new regulations are great, but Carnival is fighting it; Riley says the reductions are already law, so it’s a done deal.

Conservationists say the solution is shore-side power, which would cost the cruise line and state about $6 million. Officials say that’s an unnecessary expense, given the new emissions regulations.

The two sides can’t even agree to disagree.

A lot of reasonable people, like Zimmerman, will tell you this isn’t about banning cruise ships from Charleston.

And for a lot of folks, it isn’t. They just want more control, and more assurances that 300 cruise ships a year aren’t going to sail into port. That’s understandable. Probably wouldn’t happen anyway, but still.

It’s also true that a lot of people just don’t want cruise passengers in their neighborhoods. In their zeal, they have thrown out so many asinine reasons why that they’ve muddied the water.

Basically, that means a real debate about pollution is getting lost in a sea of less-than-realistic excuses (blocking the skyline, anyone?)

If this were really about moderation — and not just a witch hunt — the anti-cruise- ship folks should have kept their message a little clearer.

Instead, they’ve made this fight about as confusing as their fancy flag.