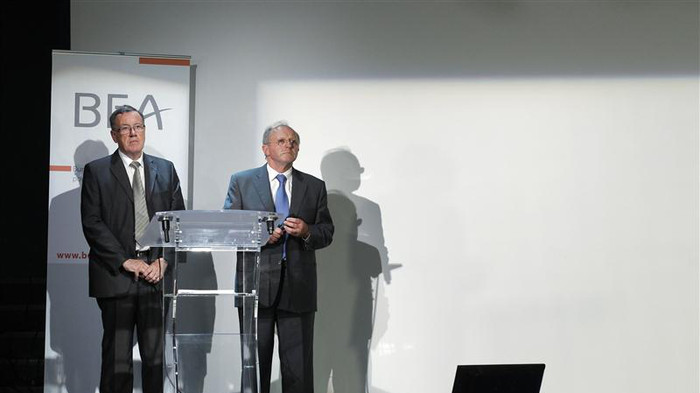 Jean-Paul Troadec (R), head of the Investigation and Analysis Bureau (BEA), and Alain Bouillard, investigator-in-charge of the BEA, attend a news conference to present the BEA final report in the Air France Rio-Paris crash at the BEA headquarters in Le Bourget, northern Paris, July 5, 2012. REUTERS/Benoit Tessier

The final report on the Rio-Paris Airbus A330 crash that killed 228 people went further than expected in castigating the air safety establishment, saying France’s flag carrier was subject to less inspection than smaller rivals.

The BEA investigation authority called for improved training of pilots, instructors and inspectors, and better cockpit design among 25 recommendations to prevent a repeat of the catastrophe.

Pilots’ trade unions and Air France have been at loggerheads with planemaker Airbus over who or what was to blame for the airline’s worst loss.

The report upheld initial findings that the crew of flight AF447 had mishandled their response to the loss of speed readings from faulty sensors that became iced up in turbulent conditions over the south Atlantic on June 1, 2009.

The doomed aircraft plunged for four minutes in darkness in an aerodynamic stall as its wings gasped for air while pilots failed to react to repeated stall alarms, according to flight recorders recovered two years after the crash.

“This accident results from an airplane being taken out of its normal operating environment by a crew that had not understood the situation,” said BEA director Jean-Paul Troadec.

He added, however, that the same situation could have occurred with a different crew on board.

The report also found that the A330’s speed sensors, known as pitot tubes and designed by France’s Thales, were only upgraded after the disaster, even though there had been previous incidents with the equipment.

It urged a review of aircraft stall warning systems following criticism of the alarm’s erratic behavior when the plane was deep into its 38,000-foot plunge.

Families of crash victims immediately criticized the report as too soft on the aerospace industry, ensuring that a row over responsibility for the accident will linger as Air France and Airbus both face a French manslaughter investigation.

“To deny, as the BEA has done, the extremely significant influence of technical defects is to go into denial about the reality of this accident,” said Olivier Morice, a lawyer for families of some of the victims.

“The victims’ families cannot accept this.”

Air France defended the pilots, saying they had responded to confused and conflicting information, including multiple warnings and alarms, aerodynamic noises and vibrations.

“In this degraded environment, the crew, combining the competence of the captain and two co-pilots, remained fully engaged in flying the plane until the last moments.”

Cockpit recordings showed that the captain was taking a scheduled break when the aircraft hit a shower of ice particles at night during an equatorial storm over the ocean, with the least experienced of two co-pilots at the controls.

The investigation has centered on the actions of this pilot and why the crew ignored repeated audible stall alarms, as well as protocols which may have discouraged the senior co-pilot from overriding his colleague to take full control.

Flight data suggested the crew mainly pulled back on their control sticks instead of pushing forward to catch more air under the wings, which is the procedure for coping with a stall.

According to representatives of victims’ families, that may have been due to faulty information displayed on a panel called the flight director, an element they said had been revealed to them by the BEA but was omitted from the press release.

By the time the captain returned, the plane was in such a dire state that the aircraft’s computers gave up trying to calculate its position and turned the stall warning off.

At that point, the pilots nudged the nose forward only for the alarm to come back to life, a contradiction severely criticized by pilot unions who say it confused the crew.

Aircraft manufacturers say that by this stage the A330 was beyond recovery, but the BEA nevertheless recommended a review of stall warning behavior.

Airbus said it had already started working on improvements to the speed sensors and would implement other findings.

The 219-page report provides food for psychologists as well as aircraft designers, with calls for improvements not only in the way pilots are taught to fly manually at high altitude but also in the way they respond to unexpected shocks.

Instructors should spring surprises on trainee pilots during practices and should themselves be better trained, it said.

“There is a lot to learn from this report on coping with surprise and handling aircraft in unusual situations,” said Paul Hayes, safety director at aviaton consultancy Ascend.

“It’s dark en route, nothing much is happening and then all of a sudden all the bells and whistles go off and humans don’t always react well.”

In a potentially far-reaching recommendation, the BEA tore up the traditional unity of France’s civil service and pointed to systemic failings in regulation and supervision of Air France by the DGAC aviation authority.

It also said Air France was subject to a proportionately smaller number of spot-checks by a team of just 12 roving official flight-deck inspectors than smaller airlines.

While a small airline faces one inspection for every 1,000 flights on average, Air France receives only one visit in 4,000.

“In this context, the probability of discovering deviations, even those that are purely regulatory, is greatly reduced for an airline like Air France,” the report said.