Skift Take
You don’t need to be Louis Kahn to appreciate how wretched an experience it is to pass through NY Penn Station. Any proposal that doesn’t begin with razing the structure is thinking too small.
— Jason Clampet
Share
Tweet
Share
Post
Send 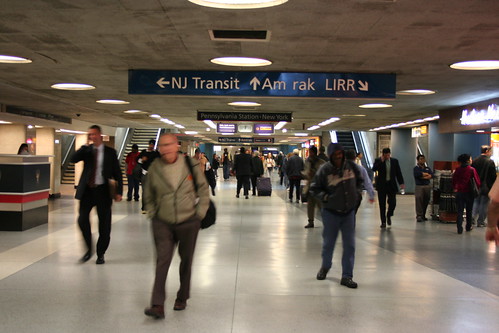 The Long Island Rail Road is planning the largest overhaul of Penn Station since the original Beaux Arts-style structure was demolished nearly a half-century ago.

But while LIRR officials try to create a terminal with some of the same appeal of the original Penn Station or the MTA’s other Manhattan railroad station, the majestic Grand Central Terminal, some commuters and transit officials are skeptical that the cramped and dingy facility under Madison Square Garden could ever be much more than what it is today.

“I figure whatever they do will be better than what is there now, but it ain’t going to be no wonderful place,” said Lorraine Diehl, author of “The Late, Great Pennsylvania Station,” who grew up near the facility. “We’re never going to get it back.”

The difference between Grand Central and Penn can be seen in the style of architecture, height of the ceilings and quality of commercial tenants. Grand Central boasts an Apple store, steak houses and a renowned oyster bar. Penn offers Kmart and fast food. Port Authority executive director Patrick Foye, a former MTA board member, has referred to the differences as “the cheeseburger divide.”

Now the LIRR, Amtrak and New Jersey Transit are looking to bridge that divide through the Penn Station Vision project. In January, the three railroads, which all call Penn Station their busiest hub, hired Los Angeles-based consulting firm Aecom to develop plans for a revitalized West Side Terminal. Aecom is expected to deliver its report by the end of the year.

The railroads are expected to share the project costs, which have not been determined. As Penn’s primary user, the LIRR is paying Aecom about half of the $1.1 million cost of the study, with NJ Transit and Amtrak splitting the other half.

Although constrained by Madison Square Garden’s location on top of the station, and having to share the hub with two railroads and six subway lines, LIRR president Helena Williams said she still believes there is room for major change at Penn Station, through which about 500,000 commuters pass each weekday.

Williams said those changes will be phased in over several years, and even decades. She expects to include some improvements in the Metropolitan Transportation Authority’s next five-year capital plan, which begins in 2015.

The changes could include luring more upscale commercial tenants, improving lighting (including by letting in natural light if possible), adding new signage and getting rid of the main train departure board in the LIRR concourse to lessen crowding there.

Grander changes — including opening up space by relocating administrative offices, knocking down walls, and finding a new use for Amtrak’s waiting area when it moves to the adjacent Moynihan Station — could take much longer to complete. But LIRR officials and their partners in the project said they are committed to seeing it through.

“We know the commuter experience can be and should be improved. . . . The idea is to create a new, modern experience for Penn Station,” Williams said.

Jeff Gerlach, Amtrak’s principal of capital program development and infrastructure and investment development for the Northeast Corridor, said the plan offers the three railroads “an opportunity for us to sort of step back and join hands and say, ‘We have to make this better.’ ”

Still, Williams insists the goal is not to replicate the old Penn, which opened in 1910, or even the beloved Grand Central, which opened several blocks away in 1913. “You have to say, ‘What have we got and what can we do with it?’ And that’s where we are right now.”

What’s there now is depressing, said Tara Turtell, 23, of Farmingdale. She has been commuting to and from Penn Station for about a year. “The last thing I want to do in Penn Station is kill time,” said Turtell, who works in advertising sales for a television network. “I want to be in and out of there as fast as possible.”

Drew Galloway, associate vice president of infrastructure and investment development for Amtrak’s Northeast Corridor, said that different visions and projects by the three railroads operating in Penn have resulted in the “polyglot mix of architecture” that exists today. He said the Penn Station Vision project marks the first time all the railroads came together with a singular purpose.

“Everybody has had a hand in stirring that pot a little bit, and part of the result, I think, is this almost haphazard look of development that doesn’t create the volume or the architecture of scale that you’d like to see in a grand terminal,” Galloway said. “It doesn’t work well today. Anybody who takes a walk down there today at 5 in the evening will agree.”

NJ Transit spokesman John Durso Jr. said his agency is confident that the “spirit of cooperation and collaboration” among the three railroads “will ultimately result in a modernized rail hub that will best serve the needs of our customers for decades to come.”

Will LIRR get fair deal?

But MTA board member Mitchell Pally, of Stony Brook, is not convinced. He said the biggest obstacle in the way of a true transformation at Penn is the same one that gets in the LIRR’s way all the time: Amtrak’s ownership and control of the station.

“I’m not skeptical that . . . [Amtrak] wants change. What I’m concerned about is where it is on their priority list,” Pally said. “To us, Penn Station is the one place where almost everybody who rides the Long Island Rail Road ends up. To Amtrak, Penn Station is one of many stations. It’s never going to be their No. 1 priority.”

Williams said she believes all parties involved realize the time is right for a new Penn, especially with a surge of development and planned transit projects on the West Side, including Moynihan Station and Amtrak’s Gateway project to build two new Hudson River tunnels.

But, for now, to look at a beautiful Penn Station, Williams has to rely on the framed photo of the original facility hanging in her office.

1910: The original Penn Station opens for business. The first day for LIRR service to and from Penn is Sept. 8.

1963: Following the sale of the station’s air rights, the original Penn Station is leveled so that a new sports arena and office complex could be built on top.

1976: Amtrak assumes ownership and operation of Penn Station from Conrail.

1994: The LIRR completes a major renovation of its portion of Penn Station, including the creation of a new 34th Street entrance, widening walkways, raising the ceiling, and building the West End Concourse.

2012: The LIRR, New Jersey Transit and Amtrak join together to launch the Penn Station Vision plan, which they say will lead to the most significant overhaul of the station in half a century.

SOLUTION: Declutter it. Organizers expect to be able to free up some space by relocating administrative offices, crew quarters and police facilities, pushing back businesses, knocking down walls and opening ceilings to create two-level height areas. An early goal is to increase lighting, including by letting in natural light, if possible.

PROBLEM: Hard to get around

SOLUTION: Give them a sign. New signs, including electronic ones, will be installed throughout the station to help guide customers and disperse large crowds that form around centralized train departure boards. Wider walkways and new escalators, stairs and elevators could help move people to and from train platforms.

PROBLEM: Nothing to see but chain stores

SOLUTION: Create one look. With LIRR, NJT and Amtrak working together, Penn could have a seamless architectural style.