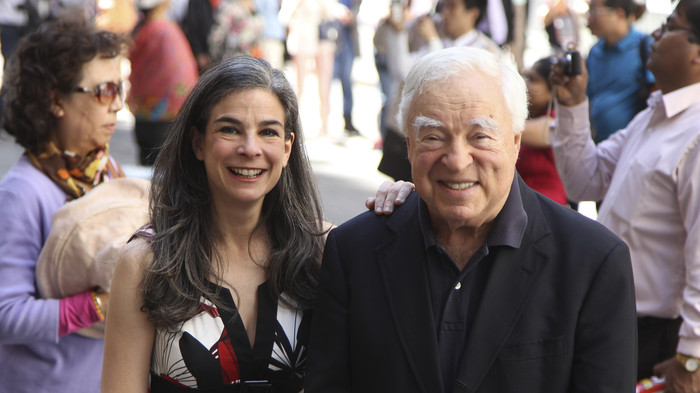 Skift Take
The secret of the radio program’s success is that no matter how opinionated guidebook pioneer Arthur Frommer is, his guiding purpose these days seems to be telling the world how proud he is of his daughter.
— Skift
Share
Tweet
Share
Post
Send

She likes Venice as a side trip from Rome; he says do Florence instead. She likes traveling with kids; he says he doesn’t — even though he took her when she was young.

But the occasional difference of opinion is part of the charm when you listen to the call-in radio show hosted by an unusual father-daughter team with a famous last name: travel gurus Arthur and Pauline Frommer.

“It was quite a shock to have my daughter disagree with me the first time it happened, but the people at the station said it was great radio,” said Arthur Frommer, 83, as they prepared on a recent Sunday for “The Travel Show with Arthur and Pauline Frommer.”

“He says when we disagree, it’s like 50 years of his life mean nothing,” said Pauline, 46, with a laugh.

It was actually more than 50 years ago when the elder Frommer self-published his first guidebook, “Europe on 5 Dollars a Day” in 1957, using material he gathered while stationed in Germany with the U.S. Army. That book launched a guidebook company that has become one of the world’s most recognized travel brands. Pauline is carrying on the family tradition with her own line of guidebooks and as founding editor of Frommers.com.

They also bring their travel expertise to the air each Sunday, broadcasting live from WOR-AM studios in New York beginning at noon. The show is carried on 115 stations, reaching every state but Alaska. There’s hardly a place in the world they haven’t been, and their off-the-cuff knowledge is astounding as they effortlessly field callers asking about everything from what to do in Denmark to the best outfitters for African safaris.

Only rarely does a question stump them (“Jewish sites in Morocco? I haven’t a clue!” says Pauline during a commercial break), and any questions they don’t have time for — including those sent in by email or Twitter — Pauline emails back during the week.

Father-daughter chemistry is what makes the show so much fun to listen to. Sometimes they both chime in to answer; other times, they divide the topics based on their experiences. Arthur took a question about river cruises in Austria and Germany, while Pauline spoke from experience about RV road trips. An email query on visiting concentration camps in Europe was shared: “You know how to go to Auschwitz,” said Arthur, “I know how to go to Dachau.”

It’s a testament to their reputation that travelers still look to them when so much is available online. Pauline says they offer clarity amid the information overload; Arthur says “people have learned to trust our judgment because we have no commercial interests to push.” Pauline adds that the occasional disagreements bolster their credibility: “It shows we’re not in anyone’s pay.”

The friction also adds to the fun. “People tell us it reminds them of their relationships with their fathers,” Pauline says. “We hear that from a lot of people who work in family businesses.”

When a caller who hates crowds asks if Versailles is worth it, Pauline says it’s “insanely crowded,” has a “big problem with pickpockets” and suggests the palace at Fontainebleau instead. Then Arthur jumps in: “Pauline, I couldn’t disagree with you more!”

A call about Venice versus Florence results in a similar divergence: “I prefer Venice,” says Pauline, followed by Arthur: “Venice is impossible in the summer months — it’s like Times Square!”

“I’m sorry,” Pauline says to the caller, “you’ve sparked an argument between the Frommers.”

Off the air, she says their “biggest arguments are about whether to travel with children.” She loves taking her two young daughters to other parts of the world, even if that means going to the park instead of a museum. “That time spent in playgrounds with the kids is magical,” she says. “You meet other parents, find the best restaurants. Besides, if you want to travel, what other choice do parents have aside from taking their kids?”

Arthur’s take on travel with children is more succinct: “I feel it destroys the trip.” Still, he recalls taking Pauline on her first voyage, with her mother Hope, in 1965 when she was 4 months old, leading to a family joke that the original guidebooks should have been called “Europe on Five Diapers a Day” instead of dollars.

Chitchat before the show includes not just going over the program but also catching up on family news. Pauline mentions her husband’s upcoming bike race and asks what the doctor said about her dad’s cough; he mentions a trip he’s planning to England to take a course on Virginia Woolf at Oxford, and prompts her to retell a story about ziplining with her family in Belize.

Then the show begins. They start with a script they’ve prepared with recent travel news — this week, how the debt crisis in Greece is affecting tourism and the dramatic drop in prices for Mediterranean cruises. Arthur occasionally rails against things that pique his ire — a $100 baggage fee on Spirit Airlines, the construction of a “phony port city” in the Dominican Republic that he says will line the cruise company’s coffers while keeping visitors from ever having “any contact with a real person.”

Next, they go to the phone lines, with a few questions coming by email or Twitter. The show’s second hour is carried by some but not all stations, and they usually host an interview or two as well, with experts on subjects ranging from medical tourism to wine trails. Any questions they don’t get to, Pauline responds in writing later.

Pauline says she’s always been close to her dad — she’s an only child — “but working like this added a new depth and respect to our relationship. It’s not always smooth, our working relationship, but it’s deeply satisfying in a way that is hard to put words to. And it’s wonderful to have a working partner whose mind is a steel trap, and who doesn’t just have smarts, but wisdom.”

She also says they’re in complete agreement on the philosophy that made Arthur’s original books so famous: “We’ve always been proudly low-budget.”

Back on the show, Mary from Queens is calling in to ask for a tour group recommendation for her 30-year-old daughter, who’s going to Italy for the first time. Pauline tries to talk her out of a tour, noting that she’ll see a lot more and meet more locals if she’s not confined to a bus filled with tourists.

As Pauline talks, Arthur nods. “For once,” he says, “I agree with you!”

THE TRAVEL TALK SHOW WITH ARTHUR AND PAULINE FROMMER: http://www.wor710.com/pages/10606518.php. Airs every Sunday at noon Eastern time from WOR-AM radio in New York, carried on 115 radio stations across the country. Live questions can be called in to 800-544-7070 or email Frommertravelshow(at)yahoo.com

Thank you for signing up
Tags: guides

Are Google Reviews Poised to Beat TripAdvisor at Its Own Game?