Bangor, ME: Where airplanes land when something goes wrong

Skift Take
A big runway and a location that places it at the edge of trans-Atlantic flights, Bangor is where travelers end up when things do not go right.
— Skift
Share
Tweet
Share
Post
Send 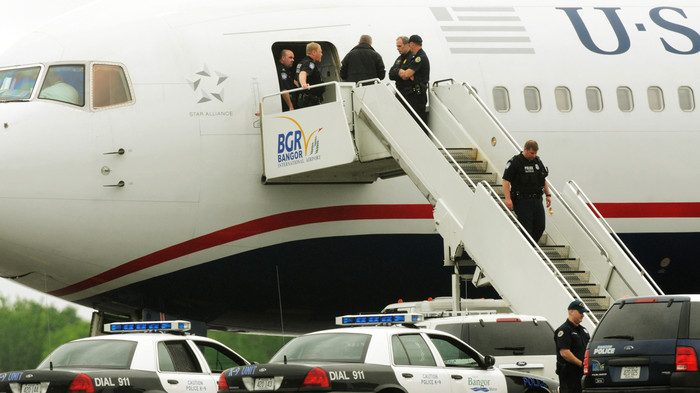 Law enforcement officials stand on a jet bridge and a passenger jet on the tarmac at Bangor International Airport, in Bangor, Me., Tuesday, May 22, 2012. The plane was diverted to Maine during its flight from France to Charlotte. Officials briefed on the incident say a French passenger passed a note to a flight attendant saying she had a surgically implanted device. (AP Photo/Bangor Daily News, Kevin Bennett)

Source: Associate Press By David Sharp BANGOR, Maine (AP) — Given the size of the place, the name “Bangor International Airport” might seem a little grandiose. But the airport actually gets an outsize share of international visitors. Of course, many of them are accidental tourists who would rather not be here at all. Because the airport is on the far northeastern edge of the U.S., incoming trans-Atlantic flights confronted with terrorist threats or unruly passengers are often diverted to Bangor, population 33,000. The latest such incident happened Tuesday and involved a French passenger who caused a security scare when she told a US Airways crew she had a surgically implanted device. The jet had been traveling from Paris to Charlotte, N.C., with 188 people aboard. “The general public might not know exactly where Bangor, Maine, is on the map,” said interim airport director Tony Caruso. But “in the aviation industry, the Bangor, Maine, name is well known, and we have a well-earned reputation for handling these types of situations.” It’s the last major U.S. airport for jets headed east across the Atlantic and the first for incoming flights, and though it has only a single runway, it is more than 11,000 feet long, long enough for the space shuttle. Before 9/11, the airport saw plenty of air-rage episodes, with drunken and disruptive passengers being dropped off in Bangor and spending the night in the local lockup. In the decade since the terrorist attacks, the number of diverted flights has dropped, but the cases are more likely to involve security threats, such as passengers on the no-fly list. One of the most notorious incidents came in 2004, when a flight was diverted to Bangor after officials discovered Yusuf Islam, the singer formerly known as Cat Stevens, was aboard. He was on a no-fly list and barred from the U.S., so he was sent back to London. Two years ago, a jetliner set down in Bangor after a former Air Force intelligence officer who had taken a prescription sleep aid claimed he had dynamite. In 2008, a passenger from Ireland found himself in Bangor after he smoked a cigarette in a bathroom, punched an off-duty airline employee and made threats about hijacking or destroying the plane, authorities said. Sometimes diverted planes go to eastern Canada. But U.S. airline flights are usually brought into Maine, where offenders are subject to U.S. law. By now, the Bangor airport has fine-tuned its response. With 40 minutes’ notice on Tuesday, authorities assembled a team after getting word that US Airways Flight 787 was coming in for a landing. Firefighters from the Air National Guard, ambulance crews, police officers, bomb-sniffing dogs and federal agents were ready when the plane touched down, escorted by a pair of F-15 fighter jets. Buses took the passengers to the terminal, where a caterer quickly lined up sandwiches and sodas. Donated cellphones were available for free long-distance calls. The passengers were soon put back on the plane and sent on their way. The Rev. Ed Pavy would have preferred an uneventful flight instead of a 3½-hour stopover in Bangor. But he said passengers were treated well and local officials were professional. “They were all about their business. They knew exactly what they were doing,” said the campus minister, part of a group from Campbellsville University in Kentucky that was returning from a mission trip to Niger. When they landed, the passengers didn’t know exactly where they were. If they knew Bangor at all, they probably thought of Stephen King, the horror writer who lives here in a house with a metal gate adorned with bat wings. Bangor was once Maine’s lumber center and home to many timber barons. There’s a statue of Paul Bunyan downtown. Pavy recalled seeing plenty of woods before he landed. “It may be in the middle of nowhere, but it served a valuable function,” he said. The diverted flights represent a tiny part of activity at the Bangor International Airport, which is home to a Maine Air National Guard wing and serves as a busy refueling hub for military aircraft carrying personnel and cargo to and from Europe and the Middle East. Since 2004, the airport has handled 21 cases in which aircraft had to land for security reasons, compared with 388 for fuel, 139 for bad weather, 50 for medical emergencies and 49 for maintenance problems, Caruso said. Each time this happens, the airport gets $2,000 to $3,000 for landing fees, ground-handling fees and fuel costs, which adds up to a small profit for the airport, he said. Stuart Frankel, a passenger from Baltimore aboard the US Airways flight, said he liked the scenery and the hospitality so much that he hopes to return to Maine for a vacation. “I was impressed by how kind and nice the people were,” he said. “Just the whole attitude is, ‘How can we help you?’ It makes me as someone who’s never been to the area want to come back.”